District 5 issues are LGBT issues — there is no reason to consider the LGBT community disparate from the greater district community. We are all concerned about housing, jobs, safety, education, and the cost of living. But our neighbors who live with HIV and AIDS, who have been discriminated against in their search for employment, or who are aging without a support network deserve respectful attention and strong government representation.

HIV/AIDS funding. I was appalled to hear of the $8 million reduction in federal funding for HIV services this past year. I stand with the LGBT contigent on the board in lobbying the mayor each budget cycle to ensure that San Francisco's historically strong support for its HIV-positive citizens doesn't drop backwards. I will also push for more money from the federal level and the Ryan White Care Act — AIDS is not a city issue, or even a state or national issue; it's a global one, and demands response from the highest levels of government. I would also encourage the city to work more closely with the many community organizations (Glide, the AIDS Foundation, and myriad neighborhood health clinics) to ensure that they're getting what they need in terms of money and advocacy, and work to find alternative, possibly private sources of funding for them. I lost my uncle in 1995 and my friend and a neighbor Unicorn Escobedo a few years ago to AIDS.

Housing and healthcare for elders. The aging LGBT population needs our support — many of our elders live alone and far away from family. As a neighborhood activist, I have supported the 55 Laguna project in my own neighborhood of the Lower Haight, and am a firm believer in the importance of creating housing that will welcome LGBT seniors, particularly those in lower-income brackets. Housing in San Francisco is egregiously expensive for everyone, and for our elders especially. As Supervisor I would work with the Mayor to ensure the creation of a robust and sustainable Housing Trust that would fund the construction of affordable low- and middle-income housing.

I deeply admire the work that organizations like Lyon-Martin have done for the lesbian, bisexual, and transgender community. I support any organization that provides primary and preventive healthcare as well as mental health services to these underserved groups. I would also look in to how our larger hospitals are serving this community, and would like to see a commitment from all of them, including those under construction, to care for it. 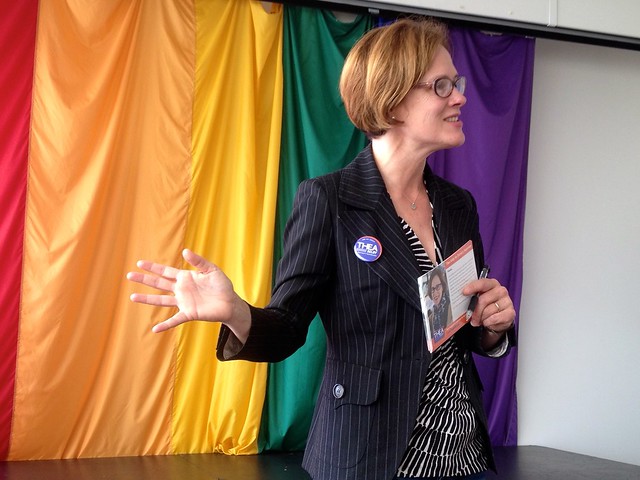 Discrimination. I phonebanked and argued against Proposition 8, particularly with my conservative Mormon sister in-law (she didn’t take it well), and left work with several local campaigns to do so. I have supported my friend Zoe Dunning among many others in and out of the armed forces, in their successful fight for the repeal of Don’t Ask Don’t Tell, and have attended many speeches and rallies on that issue. But our work on the front of LGBT rights is far from over.

I will be happy to go in front of anybody and do anything to support the repeal of the poorly named and truly stupid Defense Of Marriage Act. It is reprehensible that in 1996 we as a country codified discrimination in this way and ensured that insurance benefits for government employees, Social Security survivors’ benefits and the financial benefits of joint filings are cut off from perfectly committed, long-term couples.

I am concerned at discrimination especially on behalf of employers towards both the gay and trans communities. We as a city need to do more to support programs like the Transgender Economic Empowerment Initiative in order to put these folks back to work in tolerant and supportive environments. Several of my own colleagues and staff, both on the campaign and at my small business, are members of the LGBT community.

As a member of the San Francisco Women’s Political Committee I drafted an ordinance, eventually authored by David Chiu and put in place in January of last year, that demanded more transparency in the commission appointment process. It is our hope that this ordinance will enable more members of underrepresented groups, including LGBT and women, to participate in government.